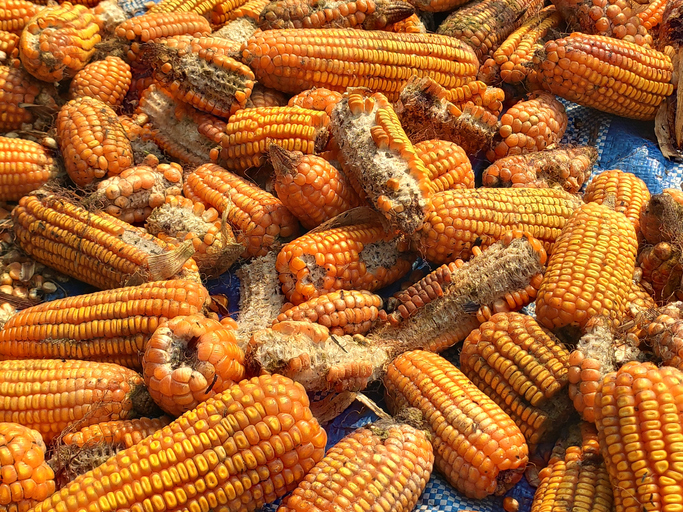 Mycotoxin testing for animal feed is an important safeguard for the entire food chain. Linked to a variety of health effects in both humans and animals, when mycotoxins enter the food supply, they can cause harm at every step along the chain — affecting farmers, grain mills, animal and human consumers of the grain, and even consumers of related animal products. Testing is needed to keep mycotoxin infection from infiltrating livestock clusters and then being passed on to the human population through associated products, such as milk and dairy.

Mycotoxins are naturally occurring metabolites produced by certain molds (fungi) that grow on a variety of different crops — like grains, cereals, nuts, dried fruits, coffee beans — and can lead to a swath of negative health effects, including acute poisoning and long-term consequences such as immune deficiency and cancer. Mycotoxins are often associated with crops that were stressed during the growth cycle or storage, such as cool summers, late, wet harvests, and droughts.

Mycotoxins can remain in food and feed long after the fungus that produced them has died. The toxins can be present even when there are no visible signs of mold or fungus. Most mycotoxins are chemically stable and survive food processing. Therefore, it’s critical to have a proactive monitoring program for agricultural commodities that includes mycotoxin testing to ensure the products’ safety. Testing should be conducted at every stage of the food supply chain, from harvesting and storing the grains to their inclusion in animal feed to end-of-the-line food products.

Let’s review some of the more troublesome mycotoxins you should be aware of and how a trusting testing partner — like Barrow-Agee Laboratories — is capable of detecting each of them.

Mycotoxins come in many varieties, and each carries different risks, tendencies to show in particular crops, and other characteristics. Below are several that Barrow-Agee Laboratories can perform the required testing for to identify.

Aflatoxin — This mycotoxin can cause serious liver damage in humans, and children are particularly affected by exposure. Aflatoxin has been known to cause liver cancer in some cases. The fungi that produce Aflatoxin can be found on crops such as wheat, corn, and peanuts, and even some spices such as paprika and chili. Most common in warm and human regions, the aflatoxin-producing fungi can contaminate crops in the field, at harvest, and during storage.

Fumonisin — Classified as carcinogenic, this mycotoxin is one of the most common to contaminate corn and corn products worldwide. As such, it is a threat to animals and humans through food, feed, and pet food supply chains. Referred to in the Midwest sometimes as Fumonisin Ear Rot, it can survive in a wide array of climates, temperatures, and humidity levels. Linked to esophageal cancer in humans, it has also affected horses, cattle, swine, and poultry with impaired growth, heart and liver damage, and kidney and liver cancer.

Vomitoxin — Also known as Deoxynivalenol or DON, this is one of the most common mycotoxins and can infect all manner of grains, including corn, wheat, barley, and rice. Early detection is crucial as its presence often indicates the presence of other harmful mycotoxins. Stable at high temperatures, basic food processing will not eliminate it from foods — ranging from flour and bread to popcorn and beer. Vomitoxin is true to its name as it causes nausea and vomiting with diarrhea, cramps, and fever. It has a particularly negative impact on the production animal sector as it affects weight gain.

Zearalenone — A product of several strains of fusarium, a fungus found in corn, wheat, barley, rice, and oats, Zearalenone is often identified alongside Vomitoxin (DON) and is seen increasingly in aquaculture — where wheat is used as a protein source in fish food. Zearalenone mimics the reproductive hormone estrogen and is particularly harmful to swine, which can experience reproductive damage in levels as low as 1 ppm. It can also cause hypoestrogenic syndromes in humans.

Ochratoxin — There are several types of this mycotoxin but the most common type found in foods — and the most dangerous — is ochratoxin A. It has been found in dried foods like nuts, beans, and fruits, it can infect wheat and barley crops, and it also has been seen in poultry and pork. Symptoms of ochratoxin include listlessness, diarrhea, and tremors, and pigs are especially vulnerable as the most common carrier. At high levels, ochratoxin is categorized as a carcinogen and can also cause neural damage, birth defense, and damage to the immune system.

T-2 Toxins — These are the trichothecene mycotoxins produced by several strains of Fusarium fungi. T-2 affects a plant’s ability to produce cells and conduct protein synthesis. Animals are particularly susceptible due to eating moldy whole grains. Production animals suffer issues similar to DON infection, such as lower feed intake and reduced weight gain, as well as chronic problems in the immune and reproductive systems. T-2 is highly toxic when inhaled and can produce lesions on the skin. In humans, T-2 ingestion can lead to severe impacts at high concentrations. With a high fatality rate among animals, these toxins affect pigs, sheep, cattle, rabbits, and chickens.

Protect the food for our household friends as well. Learn why pet food testing is essential.

Given the resiliency of mycotoxins and the broad scope of potential points where they can enter the food supply, it’s essential to safeguard every point of access — including in animal feed. Doing so will help prevent negative outcomes and the assorted dangerous health threats that come when contaminants are allowed to go undetected.

When testing and analyzing food and animal feed products, it’s important to partner with a trusted lab that will get you accurate results quickly. Microbiological testing is the crux of what Barrow-Agee offers and should be a consistent part of any company’s food or animal feed manufacturing process. Regular testing sets up ideal conditions to catch potential issues and threats as early as possible.

Barrow-Agee holds numerous microbiology and testing certifications, which establish stringent standards that must be followed and met. Our team of experts will work efficiently to make sure your samples are tested and the results sent back to you within the stated turnaround time. We’ll help you maintain operations and make the most of your production process.