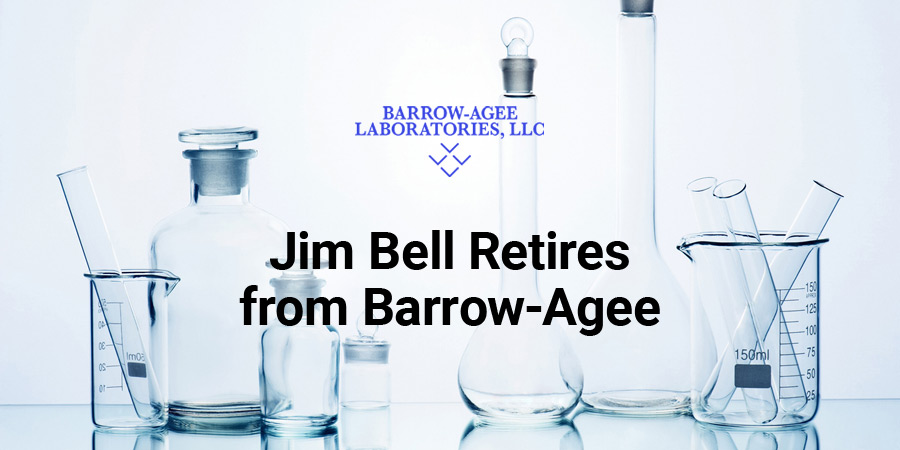 It’s not often a company is lucky enough to land someone like Jim Bell. It’s even rarer for that company to transform their mindset thanks to an employee’s example and vision. But Barrow-Agee Laboratories was fortunate to hire Jim back in 1981 and build a relationship that helped to shape the personality of the business.

Today, we wish Jim a very happy, very deserved retirement after his decades with us, and gratefully celebrate his time as a Barrow-Agee employee.

Jim started as a chemist, immediately impressing the owners with his technical skills. Beyond that, it was his empathy and customer-centric approach that built the foundation for his legacy. As he advanced in his career to Supervisor and then Technical Director, he focused on meeting with customers in the field, at trade shows, or in the labs to understand their requirements, their concerns, their visions and then deduce what their needs may be in the future.

He coordinated sales efforts and was instrumental in adding tests to the menu of Barrow-Agee offerings. Jim also led our company to pursue and obtain our ISO 17025 accreditation as well as to enter the USDA/AMS’s Export Laboratory Approval Program, in which we are still a proud participant. Jim’s relationships with, genuine interest in and detailed listening to customers enabled him to be proactive in recommending expanded capabilities that would stay ahead of their needs. His customer-centric approach became the cornerstone of Barrow-Agee’s reputation and a mindset that was contagious among his coworkers.

From 1999–2008, Jim left the company to pursue other interests, but his framework for customer interaction became the catalyst for Barrow-Agee. He returned to us in 2008 in his rightful place as Technical Director (for which we were extremely grateful and thrilled), where he continued to innovate and set an example for others until his retirement on December 31, 2018.

Jim’s career here drove Barrow-Agee’s beliefs that there’s no customer too big, none too small — everyone is important and worthy of real conversations and genuine care. That extended to the internal staff as well. Jim routinely urged chemists to push their own boundaries, try new tests, continue learning and build their expertise. He would encourage others to understand how this would help them in their career, even outside of Barrow-Agee. His down-to-earth, approachable nature made him a huge asset to our team, and he will be missed.

We wish Jim the best of luck and all the happiness in his retirement, and we thank him for his friendship, his mentorship, his vision, and his impactful years at Barrow-Agee.